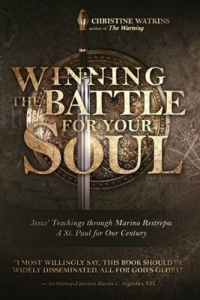 Winning the Battle for Your Soul

Winning the Battle for Your Soul contains some of the most extraordinary teachings that Jesus has given to the world, teachings that will profoundly alter and inform the way you see your ancestry, your past, your purpose, your future and your very salvation. They have come to us through Marino Restrepo, hailed as one of the greatest evangelizers of our time. Formerly a wealthy Hollywood film producer steeped in serious sin and the New Age movement, he was abducted for ransom by Colombian guerilla rebels and held captive in the Amazon jungle for nearly half a year. At the beginning of his torturous kidnapping, he underwent a mystical conversion. In the span of one night, Marino was given a complete illumination of his conscience, which revealed to him the sinful state of his soul. He then endured an experience likening to his own particular judgement, and his sentence was hell. With a contrite and renewed heart, Marino received infused knowledge of divine matters, which he was later called to share with the world. Today, Marino is a Catholic lay missionary who has been preaching the Gospel message throughout the world since 1999. With the full support of his bishop, he is the founder of the Church-approved foundation, Pilgrims of Love.

(A shorter version this testimony can also be found in the book, The Warning.)

« Awakening at Lourdes Maryam of Bethlehem »