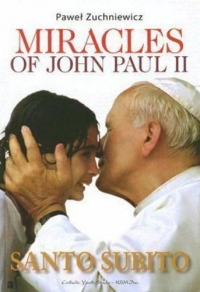 An instant best-seller when released in Europe, this powerful book describes the life and impact of Pope John Paul II as told by individuals from all over the world who give moving personal testimonies how they experienced healings through the intercession of Pope John Paul II during his lifetime. From little children to old age adults, including Cardinals, well-known lay people and many others, these detailed testimonies reveal amazing healings and answers to prayers through the direct intervention of John Paul II while still alive.

This book also takes us behind the scenes of the May 13, 1981 assassination attempt on the Pope in St. Peter.

"I always admired Pope John Paul II and felt he was such a devout and pious man, but this is the first time I was able to discover all of the many miracles that can be directly attributed to his intervention and prayers on behalf of the petitioners. It was such an inspiring book and I couldn't stop reading. I would definitely recommend it to all."

"Great book about John-Paul II. I had no idea that many miracles took place after he had been asked to pray for someone. This is a typical book about a saintly man. If you wish to understand John-Paul II in greater detail, this is the book for you."